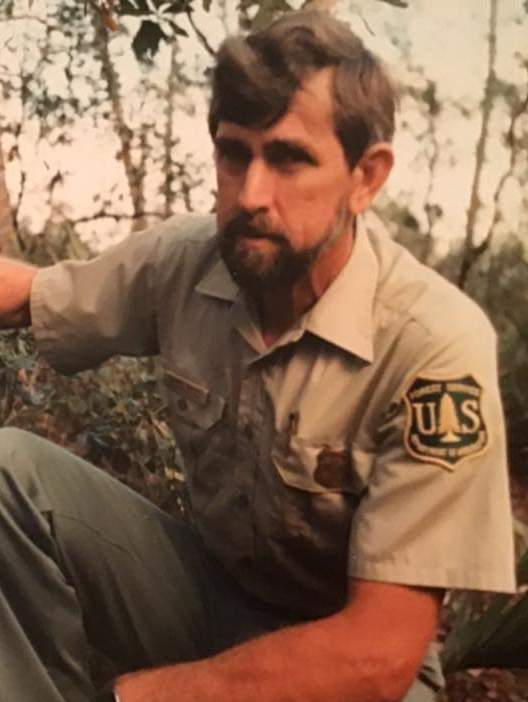 Johnnie Martin Pohlers of Ocala, Florida, passed away on Nov. 26, 2019.  Johnnie was born in Albany, Georgia, to Willia Mae (Jones) Pohlers and Johannes Pohlers on January 24, 1943. He grew up in Sparr, Florida, where he spent days fishing with his friends. He graduated from Anthony High School in 1961. Johnnie and Janet (Mills) Pohlers were joined in marriage on August 1965 in Ocala, Florida. Johnnie spent 22 years in the USAF and served in Vietnam in 1966. After his military retirement, he followed his dream of working for the U.S. Forest Service for 16 years. Forever walking a forest trail, Johnnie was instrumental in getting and blazing the Lake Eden Sink Hole trails and created the trails at Pat's Island known as the Yearling trails. He led many interpretive forest walks. In his retirement years, he volunteered at the Silver River Museum Ocali Days, where he enjoyed sharing his knowledge of Cracker life in the Hinton home.  Johnnie is preceded in death by his Parents Willia Mae and Johannes Pohlers and his brother, Bobby Williams. He is survived by his wife Janet (Mills) Pohlers, his children Jennifer Pohlers and Jon Pohlers, and his grandson Andrew Pohlers. Memorial to be held at the Silver Springs State Park, (Baseline entrance), on December 7 at 12:00 at the Magnolia Covered Pavilion. Those who wish to celebrate his life are welcome to attend. The cost of entry to the park is being covered. If there is bad weather, the memorial will move inside.  In lieu of flowers or gifts, please donate to St. Paul’s Methodist Church Youth.