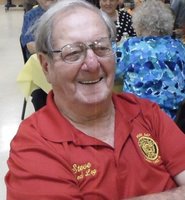 Stephen “Steve” Carillo, age 89, of The Villages passed away on Friday, November 22, 2019. He was born in Station Island, N.Y. and moved to The Villages from Marina CA in 1996. Steve was career Army having served in Vietnam and Korea. After his retiring from Service, he became a Letter Carrier for the USPS. Steve was a volunteer Fire Fighter and Reserve Police Officer in Marina CA for approximately 20 years. He was active in his community and a powerful role model for all who knew him.

Survivors include his daughter Cecilia from Grand Prairie TX and his son Steve (Leanne) from Herald CA. 3 Grandsons; Joseph, Anthony (Nichole) and Dominic (Courtney) and 4 Great-Grandchildren; Ella, Dominic, Aliya & Giovanni as well as his significant other, Eileen. Steve had an amazing and long marriage with his “girl” which ended when his wife, Joan passed in 2011. Steve was an amazing man, who will be greatly missed by all.

A memorial funeral Mass will be held at 8:30 am Monday, December 9th at St. Timothy’s Catholic Church with inurnment to follow in Florida National Cemetery, Bushnell. A reception will follow at Orange Blossom Hills Golf & Country Club beginning at 12:30 pm.

Memorial contributions in place of flowers can be made to American Legion Post #347 or The Village Honor Flight.